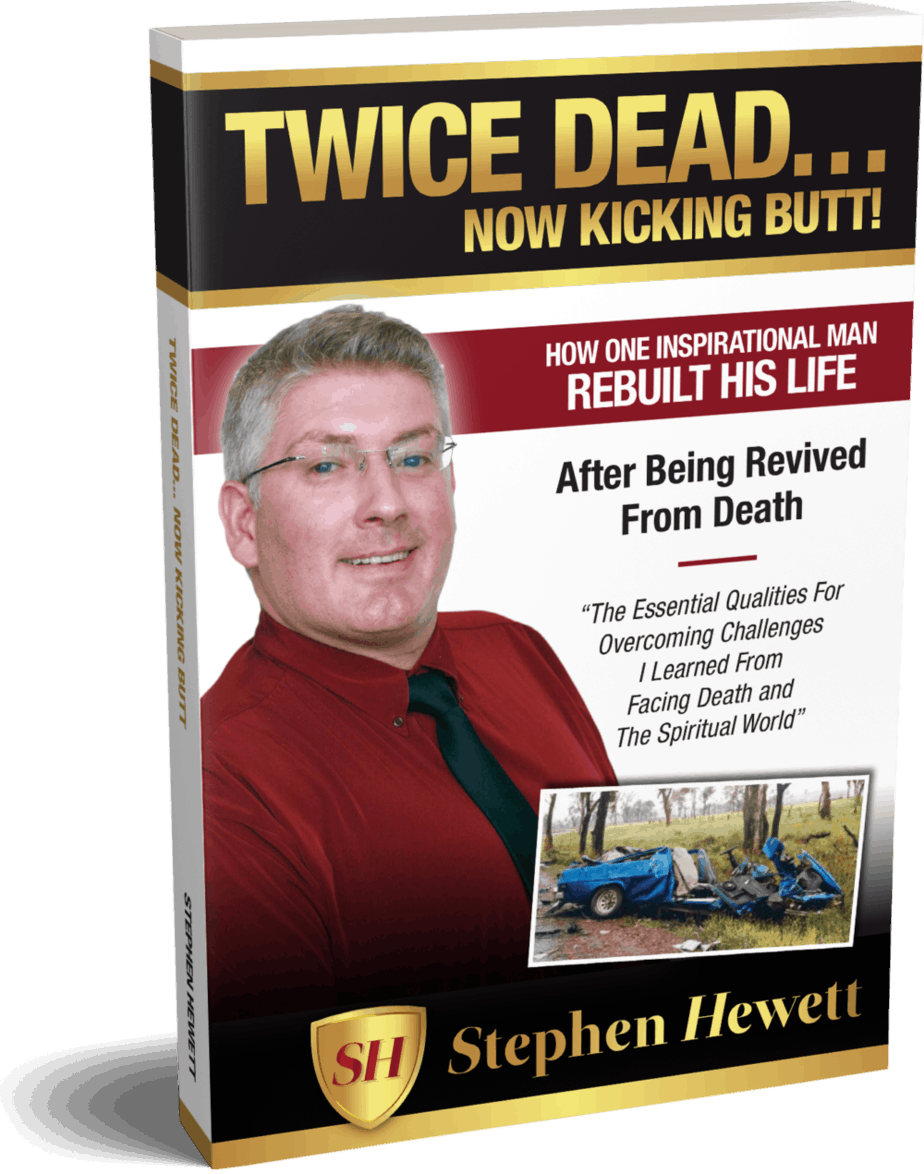 Have you ever wondered what it is like to die? To enter another realm where you mingle with others who have passed? To see living family and friends from your place up in the spiritual world? Will there be bright, white lights? A tunnel? A man or woman, arms extended, waiting to greet you?...

Wonder no more because Stephen Hewett, the man who died TWICE and came back to live life to the absolute FULL reveals all in TWICE DEAD… Now Kicking Butt!

“Strength doesn’t come from winning. Your struggles develop your strength. When you go through hardships and decide not to surrender, that is strength.”

After countless operations and months in hospital Stephen still could not walk, talk or do much for himself. His family, his mother in particular, became his long-term carers. He required so much assistance they had to convert their house to cater to his needs and disabilities. Previous to the accident Stephen was a carpenter, using his hands to create beautiful cabinets. After the accident one of his arms only had one muscle. He also suffered from ABI.


Living with ABI/TBI and understanding those that do

ABI/TBI Acquired/Traumatic Brain Injury affects 1 in 45 Australians. This figure is prevalent in the under 65s. With so many people either being affected or knowing someone who is, it is key to read Stephen’s book to understand sufferers.

Stephen Hewett’s book details his experiences entering and exiting the spiritual world. His findings have been likened to those of Swedish author Emanuel Swedenborg in Heaven and Hell. Unlike the quick as a flash glimpses often described by those who have seen ‘the other side’, Stephen’s own journey within the spirit world lasted for weeks. He was therefore able to discover and learn about what happens there as well as being able to take an unprecedented view of life on earth as seen from ‘above’.

Rather than allow his accident and injuries to stall his life, Stephe Hewett has used them to spur him to greatness. Deemed the ‘walking miracle’ Stephen has taken a tragedy and turned it into triumph - something that he wants to use to motivate others. As a motivational speaker Stephen Hewett and his wife, Peta Ann, gets to change lives!

The 3Ps – facing the biggest challenges

Stephen uses his 3 Ps of Perseverance, Productivity and Power to motivate his readers and listeners. These are the three key ingredients and qualities that Stephen recognizes as making him the ‘walking miracle’ that he is today.

How did this Stephen Hewett go from dead - to coma – to international motivational speaker and author? Read TWICE DEAD…Now Kicking Butt! To find out.